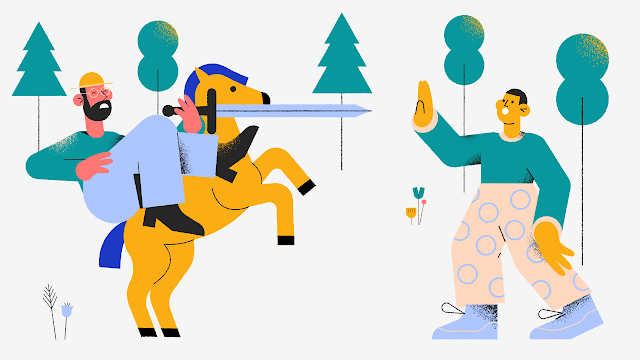 This is likely the exact opposite of what you’d expect to hear from a recognition and engagement company. While we indeed promote rewarding and showing appreciation when your employees or colleagues have achievements of any size, it's equally important to be sure you allow and even promote healthy conflict – where the word "healthy" is a critical adjective.
It's very apparent that leaders are increasingly conflict-avoidant. Have you noticed this behavior from leaders and managers? How their behavior extends into how colleagues handle conflict with one another? We're not proposing you allow unfettered or inappropriate conflict to brew and fester. We're suggesting that the stigma behind conflict needn't be so severe. When managed correctly, your organization can really benefit from all the downstream effects of healthy doses of conflict.
We live in an era in which employees tout wellness, happiness, recognition, perks, and more as their guideposts when choosing one employer over another. Candidate choice has made that investment even larger. This means we've all begun to see conflict as antithetical to engagement and collaboration.

Studies show that couldn't be farther from the truth. Organizations that avoid conflict, either purposely or tacitly, create an environment where many critical forms of communication start to break down:
So, why aren't leaders and organizations handling this better? Like problems, people tend to focus on the symptom rather than focusing on the upstream root cause. An example is when Partnerships and Product aren't working as closely together as leaders expect or desire. The root problem is simple; it's mismanaged conflict or lack thereof. You can't improve collaboration until properly addressing your issues with conflict.

This tends to come as a surprise to leaders, managers, and even colleagues because they have expectations that investments into collaboration will instead reduce conflict when, in fact, these investments (e.g. restructuring, new tools) actually produce more conflict – not less.

Leaders, managers, and colleagues miscalculate impending conflicts while simultaneously undervaluing the importance of conflict to the organization. Much of the value desired from cross-functional collaboration is generated by differences in points of view, information access, talent, and more. Collisions and friction between people decrease when novel and creative solutions are developed, and thoughtful trade-offs among differing points of view are made. How do you build an environment where you embrace and encourage conflict rather than having a goal to reduce conflicts and, just as necessary, develop tools for managing that conflict?
Humans lack the inherent ability to deal with conflict. After all, we're biologically wired to seek safety through our survival instincts – this makes conflict even more challenging but still not an excuse to avoid it (feedback isn't going to kill you). Worse yet, societally, we're indoctrinated to be sensitive and kind (you've heard the phrase "If you can't say something nice, don't say anything at all!"). Finally, to stack on as if those two weren't enough, we're rewarded for following the flow and punished when we "rock the boat" at work. In short, conflict aversion runs extremely deep.
Despite the hurdles and obstacles of introducing conflict to your organization, there are straightforward solutions that leaders, managers, and colleagues can put in place to manage it effectively.

There are two paths that we see:
These paths will help your organization embrace conflict, enabling your leaders, managers, and colleagues to reap the full value and benefit of truly effective cross-functional intra-organization collaboration. Conflict then moves from being a scary liability to a notable asset.

How to manage the emergence of conflict

Managing conflict is more manageable when the members involved are equipped to resolve it themselves. Here are a few tools to help members in conflict make wiser decisions which can lead to the institutionalization of these tools:
For the sake of your time, let’s focus on creating a structured resolution plan and communicating it repetitively.– create a structured resolution plan and communicate it repetitively.

We've all been here at least once in our career. To better explain, let's pretend we all work for a pretend organization called Acme Corporation. You're a partnerships person with a prospective customer asking whether Acme's service supports a specific integration (you know you don't, but this deal will push you over your quarterly quota). You know you'll need to speak with design, product, marketing, engineering, and leadership to get complete buy-in. Expectedly, each team is having a bit of a reaction to this. How do we redistribute resources off other critical projects? Who has the last say when there are misalignments on development vs revenue? Considering these challenging questions, Acme is discovering that one large prospect produces a lot of internal conflicts.
How familiar is this story, too familiar? Most organizations will face comparable problems to this one. The outcome is that deals become increasingly harder to close due to damaged relationships between the parties involved. You need a structured resolution plan to avoid people getting weighed down by not only the path to discovering the solution but also finding the "right solution." Often when the members involved muster the courage to confront their disagreements, it's an "I know best" approach ending in small concessions with the consequence of a less than ideal "split the difference" resolution – if not a complete standstill.
We recommend that you establish a company-wide process for resolving disagreements to alter this familiar experience's outcome. A well-defined, designed, and communicated resolution plan will dramatically reduce wasted time and resentment. In return, your organization will yield more innovative outcomes and more productivity. To be sure it remains effective, be sure your plan is clear, concise, and offers step-by-step instructions to follow. To be sure it's sustainable, it needs to be made an integral part of everyone's day-to-day workflow, specifically when engaging with one another and a conflict emerges.

If you've implemented the above, only some complicated conflicts will need to be resolved by leadership. However, it's critical to get this right. Reports will be watching how managers resolve the conflict and to further benefit from the escalation, managers must resolve the conflict through ways that model desired behaviors in reports:
To save time, let's focus on – make escalated conflict resolution fully transparent.

Too often, we hear stories that when a conflict or problem is resolved at the manager level, the process and justification backing the resolution are left inside a black box to which the reports don't have access. Knowing that it's not extremely helpful to share every single arduous detail to summate the resolution, not taking the time to explain how the decision was met is missing a significant opportunity.

A candid explanation that walks them through the process will offer direction to people when trying to resolve their future conflicts. It also removes the rumor-mill of which manager won or lost and which has the most influence or power. Not knowing this leads to speculation and brews mistrust, spark territorial battles, and eventually deters cross-functional collaboration little by little.

An exercise to improve and normalize conflict

We like to leave people with a tangible and easy tool to help kick off processes we discuss – especially when they're as sensitive as conflict can be. One way to make conflict feel normal is to outline each role or person's discrete value and the stresses that you believe exist for each. Here's how to do the exercise:
Ask these questions for each:
When finished with the exercise, you will find that most of the time, when the team is fully transparent, and all information is openly accessible, your team will align around an agreed-upon resolution. Where they can't, this is an excellent time to leverage your escalation plan and use it as an opportunity to coach.
We recommend using this exercise on limited size teams (not entire organizations) in scenarios when there are conflicts such as:
The outcome of this exercise is typically a novel discussion amongst team members. The increased awareness and shared language will help your team discover that much of their conflicts once perceived as interpersonal friction was actually healthy role-based conflicts. This will help them quickly realize that conflict is not a liability or something to avoid, but it's, in fact, a benefit and strength to wield.

As a leader, manager, or even an employee who wants to see their organization reach new levels, you should begin changing the internal perception of conflict. Don't start with training programs in conflict resolution; instead, start trying to normalize conflict in your workplace by reframing it. This will lower the inter-personal conflict to levels that enable healthy conflict to gain traction.